DNS over HTTPS (DoH) is a next-generation communication protocol on track on becoming a major Internet standard (RFC 8484). By adding strong encryption and authentication, DoH tries to eliminate some of the biggest problems DNS had from the beginning: censorship, surveillance, and man-in-the-middle attacks.

FDNS was designed to run as a local DoH proxy on a Linux desktop, or as a server for a small network. Lean and mean, it protects the computers against some of the most common cyber threats, all while improving the privacy and the system performance.

FDNS is written in C and licensed under GPLv3. The number one job is privacy. We use only DoH services from non-logging providers, while preferring small operators such as open-source enthusiasts and privacy-oriented non-profit organizations. 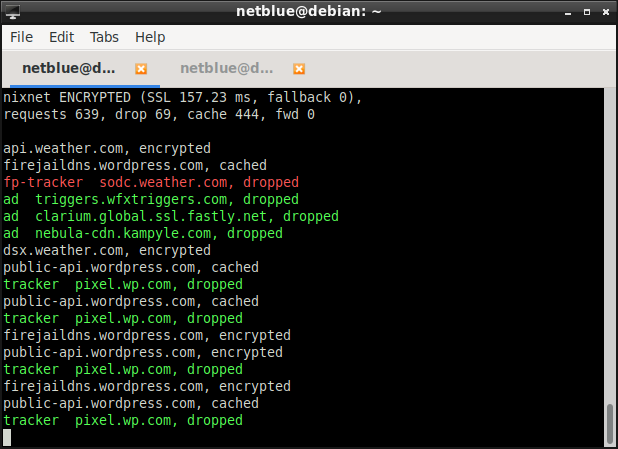 FDNS is a community project. We are not affiliated with any company, and we don’t have any commercial goals. Our focus is the Linux desktop. Home users and Linux beginners are our target market. The software is built by a large international team of volunteers on GitHub. Expert or regular Linux user, you are welcome to join us!

Security bugs are taken seriously, please email them to netblue30 at protonmail.com.

June 2020 – released FDNS 0.9.62.8. In this release we are replacing HTTP 1.1 with HTTP 2 in the protocol stack, and we are adding a lot of new DoH servers to our list – only https://commons.host brings in a network of more than 20 geolocated DoH servers! We also added several new command line options, and fixed quite a number of bugs. Arch Linux just started packaging and distributing fdns in AUR. Release Notes

May 2020 – released FDNS 0.9.62.6. In this release we are adding whitelisting domains functionality, resizable monitor window, support for multiple FDNS proxies running on the same system, enforcing NXDOMAIN for blacklisted domains, a server list update and bugfixes. A lot of development went into our regression testing, we started tracking gcov-based code coverage for our tests (published on https://netblue30.github.io/regtest/), and integrated lgtm.com security scanner in our ongoing development process. Release Notes

February 2020 – released FDNS 0.9.62.2. The project is feature-complete! We added over 60 new DNS over HTTPS servers, documentation, an automated test framework, and lots of bugfixes.

December 2019 – released FDNS 0.9.62. This is the first release of the project. (Download, Documentation, FAQ)